You are here: Home / Book Buyer's Guide / City of Masks by Ashley Capes 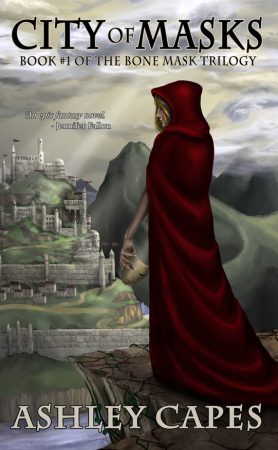 Waking in Anaskar Prison, covered in blood and accused of murder, nobody will listen to Notch’s claims of innocence until he meets the future Protector of the Monarchy, Sofia Falco.

But Sofia has her own burdens. The first female Protector in a hundred years, her House is under threat from enemies within, the prince has made it clear he does not want her services and worst of all, she cannot communicate with her father’s sentient mask of bone, the centuries-old Argeon. Without the bone mask she cannot help anyone — not herself, and certainly not a mercenary with no powerful House to protect him.

Meanwhile, far across the western desert, Ain, a young Pathfinder, is thrust into the role of Seeker. Before winter storms close the way, he must leave his home on a quest to locate the Sea Shrine and take revenge on the people who drove his ancestors from Anaskar, the city ruled by the prince Sofia and Notch are sworn to protect, whether he wants their help or not.

Link To City of Masks On Amazon Kindle Unlimited

What Inspired You to Write Your Book?
Two things inspired me – one was during a trip to Italy (which I was very lucky to be able to take) when I saw the beautiful cliffs of Amalfi and had the idea of a city built on the slopes of a mountain and the other was the 'wrong man' starting point that so many great Hitchcock films start with.

How Did You Come up With Your Characters?
I think most of my current characters have tiny parts of dozens of other characters I've written over the years, and fragments of people I meet too. The characters in 'City of Masks' are among my favourites because they were so fun to write because they each draw on powerful archetypes and that makes them recognisable – but I also tried to have them true to the environment around them and hopefully to surprise each other.

Link To City of Masks On Amazon Kindle Unlimited