You are here: Home / Book Buyer's Guide / Buyer’s Guide: What Survives of Us by Kathy Miner 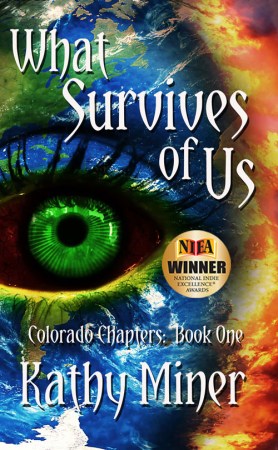 Winner of the National Indie Excellence Award in the Cross-Genre Category! What would you do to survive, if life as we know it ended? What should you do, to protect yourself and your family? In this post-apocalyptic tale, “What Survives of Us” is just one of many questions the survivors of a devastating plague must ask and answer, and those answers will shape the world that emerges.

Link To What Survives of Us On Amazon Kindle Unlimited

What Inspired You to Write Your Book?
I’ve always loved futuristic fiction, and I’m fascinated by the ways in which we survive disasters, both as individuals and as a species. Also, as clichéd as it sounds, I dreamed about Naomi, one of the main characters. I had to figure out what happened to her, and those imaginings became this book.

How Did You Come up With Your Characters?
Most of my characters “volunteered” – that is, they arrived in my head and insisted on having their stories told. Many of them surprised me – I never saw Verity coming until she walked right into the book. Very rarely do I sit down and deliberately create a character – I just let the best driver for the vehicle of the story show up.

“Check it out – how weird is that?”
Grace looked up from her homework as her little brother gestured at the TV. Benji was watching the evening news for his social studies current events assignment, and the TV was tuned to a local channel. On the screen, a fire truck, ambulance, and half a dozen cop cars were sitting in front of a Safeway store, lights flashing. “What happened? Did somebody rob the store?”
“Nuh-uh. This woman just dropped dead. Now they won’t let anyone leave the store because they think she might have a communication disease.”
“’Communicable,’” Grace corrected. “Where is this – Colorado Springs?”
“Yep,” Benji answered. “Southgate area, they said. Where’s that at?”
“Down south, not far from the World Arena – you know, where we saw ‘Walking with Dinosaurs’ with Dad?”
They passed through Colorado Springs once a month on their way to visit their dad, his new wife and their brand new baby half-brother in Woodland Park, and sometimes went on the weekends to shop or catch a movie with their mom and step-dad. Lately, Grace had been visiting even more frequently on dates with her boyfriend, William. There wasn’t much to do in dinky little Limon. She tried to think of what else would be nearby that Benji would recognize. “It’s not far from the zoo, just a little north and east, I think.”
“Okay.” He frowned in concentration as he wrote carefully in his notebook. “Will you spell ‘communicable,’ please?”
Grace smiled. “Sure thing, buddy.” He was so cute, with his polite, studious, serious ways. As little brothers went he was bearable, though she suspected he had been in the bushes with his buddy Nate the other night, spying on her and William when he brought her home. Some blackmail might be in the works. “Did they say what disease they thought she had?”
Benji read from his notes in his best “Announcer Bunny” voice, not that he’d ever let his friends know he still watched Between the Lions on PBS. He was in 7th grade for pity’s sake – way too old for a show that taught kids to read. “Authorities refuse to speculate as to the nature of the woman’s illness,” he read from his notes, “But we will keep viewers informed as this story breaks.” He paused, wrote something down, then continued in his normal voice. “They think she was a soldier from Fort Carson, and that she was really young. Some people inside the store called the news station and talked to the reporters before the police took their phones away.”
“Huh. The police took their phones?” That struck Grace as extreme. “Bet they weren’t too happy about that.” She returned her attention to her own homework, but a part of her mind had locked onto the story, the facts clicking into place with too few pieces to complete a picture. She’d follow up, she decided, later this evening, either online or on the late news. Grace couldn’t resist either puzzles or mysteries, and this story seemed like both.

Brian Nelson flopped down on the bleachers beside Jack Kiel – Pastor Jack to the kids – and lifted his t-shirt to wipe his dripping face. The raised shirt revealed a regretful expanse of white belly spreading over the top of his basketball shorts. He tugged the shirt back down and wheezed in air. “Darn altitude. Can’t catch my wind.”
Jack didn’t smile, and figured that would count in his favor when the Day of Reckoning came. Brian had moved to Colorado at least 20 years ago. “Yeah. It takes getting used to, that’s for sure.”
“Oh, shut up.” Brian’s reply was easy and without heat. “I’m fat and out of shape. Even lies of omission are a sin.”
Jack laughed, and together they watched Jack’s youth group kids – including Brian’s oldest son – hustle the basketball up and down the court. It would be Jack’s turn to substitute next, when one of the players needed a break or a drink of water. Or a minute to flirt with the group of teenaged girls watching the action, Jack thought, and smiled. Some things never changed.
“Small group this week,” Brian commented after a few minutes. “Where’s Ava and the kids from the Springs?”
“She got called into work, last minute,” Jack answered.
Ava Beckett was a Colorado Springs police officer who attended their Woodland Park church with her husband, also a cop, every week. They were both Safety Resource Officers in Springs-area high schools, and had organized a group of kids to come up the pass to play basketball every Friday night with Jack’s youth group kids. It had proven to be an interesting experience; most of Jack’s kids were from sheltered, middle-class families, and the kids Ava brought all fell into the “at-risk” category. Watching the two groups learn to mingle and understand each other, and to develop tentative, fledgling friendships had been immensely rewarding.
“That would stink,” Brian commented. “One of the advantages of being an accountant, I guess. Other than April 15th, I don’t get called in for emergencies. Did she say what was going on?”
“Some kind of quarantine situation,” Jack answered, “I guess there was a death at a grocery store in the Springs, and they don’t know what the woman died of. The health department took one look and called in the CDC. Ava says they’re bringing in cots and bedding for the people still in the store, keeping them over night. She’s working crowd control – I guess a lot of family members have gathered, and they’re angry and scared.”
“I would be too, I imagine. Probably just another case of West Nile,” Brian predicted, then nodded at the action on the floor. “Getting a little hot out there.”
He was right, Jack thought – elbows were being applied just a little too liberally. “Hey!” He shouted. Shoes shrilled on the floorboards as the action stopped, and ten faces swiveled his way, several of them more flushed than they ought to be. “Don’t make me come out there and whup up on ya’ll! Keep the elbows tight, boys!”
Perfect time for a pastor to sub in, he decided, watching them scuff and grumble. He stood and peeled out of his sweatshirt. Unlike Brian, his thirties hadn’t brought weight problems with them, a fact he owed at least as much to good genetics and these Friday night basketball games as to his eating habits. “Alright, you babies, which one of you wants to get a drink of water and sweet-talk the ladies?”
He jogged onto the court, serenaded by a chorus of giggles from the girls, and slapped the kid with the reddest face on the shoulder. “James, why don’t you take a break and give an old man a chance to play?”

Link To What Survives of Us On Amazon Kindle Unlimited