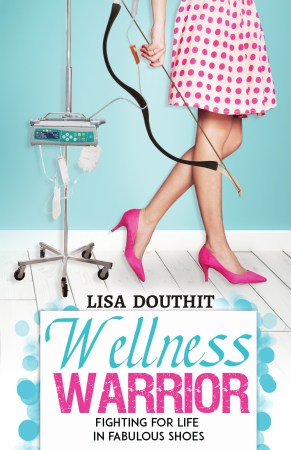 Have you ever awoken to find you’ve contracted a devastating disease that ended life as you knew it forever? Lisa did …multiple times. After surviving four different cancers, she hit the final wall when a life-threatening autoimmune took over. Exhausted and discouraged she had to make a choice. Was she going to give in to disease and let nature take its final course, or would she use whatever strength she had left to figure out what the hell was happening to her … and, more importantly, WHY?
After immersing herself in the study of illness from a physical, emotional, and spiritual perspective, Lisa learned how to recreate herself from the ground up while keeping her sense of humor. Throughout her crazy journey, she shares practical skills and a quirky higher guidance to create positive shifts in your health and will serve as a roadmap through the darkest hours of life.

What Inspired You to Write Your Book?
After dealing with chronic illness most of my adult life, I wanted to find out how to be well without perfect health. Since there was no roadmap to wellness, I did my own research to find out how to heal in mind, body and soul.

How Did You Come up With Your Characters?
This is based in reality and the characters are all folks I know and people I have worked with.

It is not the strongest of the species that survives or the most intelligent, but the one most responsive to change.
Charles Darwin

It felt as though medical problems permeated my entire life. As a kid, I would get strep throat and other typical childhood diseases, just more often than other children. In my teens, unexplainable rashes covered my body. They eventually went away, but when I was in my mid-twenties, they reappeared on my arms and stuck around for longer than I would have liked. After a few weeks and many failed home remedies, I went to the doctor, mostly due to vanity. After all, I figured, who would want to date a girl with red bumps all over her arms? For some reason, my doctor ordered a chest x-ray after studying the affected limbs. A week later, he called me back to his office.
I sat on the exam table, wringing my sweaty hands together in anticipation of his arrival. Doctor’s offices have always made me nervous, and this one was no exception. When he walked into the room, he carefully avoided making eye contact. I thought that was rather suspicious, since he’d tried to ask me out during several of my previous appointments, which, I might add, was awkward during my annual gynecological exam. But I digress.
He mechanically placed a film on the x-ray screen. In a low, detached murmur, he said, “I want to show you your scan.”
It was all he had to say.
It appeared fairly innocuous at first glance. After closer inspection, I asked why he’d used bad film, since it looked like there were shadows in my chest that resembled a halo.
“That’s not a halo, my dear; it’s a baseball-sized tumor sitting behind your heart.”
And there it was, in all its disturbing and horrific glory. I’d gone in for some steroid cream to clear an unappealing rash and come out with a diagnosis of cancer.
Cancer.
Seriously? Who gets cancer at twenty-six? I’m no expert, but isn’t cancer usually reserved for the golden years?
It was a surreal experience, to say the least. After my appointment, which had ended in silence and confusion on my part, I got in my car and drove for hours trying to understand how my world could be upended in thirty short minutes. Eventually, I ended up at my boyfriend’s house. I sat on his front porch, completely conscious of the shock and emptiness I felt as I stared into space, absently holding a business card for a local oncologist.
A car pulled up to the house but stopped short of the garage. My boyfriend slowly came into focus as he made his way over to me with a questioning expression on his face. Judging by his concern, I must have appeared a little distraught . . . well, maybe a bit more than a little.
He sat next to me. “What’s up?”
Looking intently at the tree at the end of the street, which seemed to be the most interesting thing imaginable at that moment, I vowed not to turn toward him for fear of breaking down.
“I’m debating.”
He was confused. “About what?”
“Whether we should have Mexican or Italian for dinner tonight.”
“Which did you decide on?”
“Mexican.”
“We had that a few days ago.”
“Do you want Italian?”
“I don’t care.”
“Obviously you do, or you wouldn’t have commented on Mexican.”
“No. Now I am dying for a fish taco.”
I shook my head. “Let’s do Italian.”
“Okay. Italian it is. Anything else bothering you, honey?”
I vaguely remember telling him about the appointment with my doctor. I told him about the new path my life was about to take and that I had been “blessed” with cancer.
Blessed? Even I was not fully aware of the nonsense that slipped from my lips as I mouthed those ridiculous words. It was an odd thing to say, even for me. And I can say some pretty odd things.
I didn’t realize it then, but looking back, I think the I who spoke wasn’t necessarily the earthly I but the spiritual I we all have within us. There are many names for it: higher self, the soul, or the voice of God whispering in our ear. Whatever we call it, this inner voice was giving me a heads up that I was about to take a sharp left turn on the winding road of life. It was time to find my way down a different path or get off the highway.
My boyfriend’s response to my “blessing” was, “When this is over, you wanna get married?”
I looked at him blankly. My brain was officially on overload. We had been dating only a couple of months, and, although the idea was lovely, I wasn’t sure I was ready to tackle cancer and a marriage proposal on the same day.
Every girl fantasizes about the moment her man pops the big question. The circumstances surrounding his proposition just weren’t part of my dream. Besides, I needed to keep my focus on the task at hand: ridding my body of whatever was eating me up inside.
Literally.
As the vision of a monster ravenously gorging itself on my innards crossed my mind, I started to wonder. Can this analogy apply on a deeper level, too? Was there something else eating me up, as well, that may have triggered a physical response?
No way. What was happening to the thoughts in my mind? Where were those ideas coming from? I’d always made fun of people who spoke in wild statements like that before. I believed in the scientific model and nothing else. Could it be possible there was more to understand out there? Was I willing to go there to see?
I supposed time would tell. For the moment, I would have to put those lofty concepts aside and settle for some eggplant parmesan and a cannoli.
Or maybe a burrito.