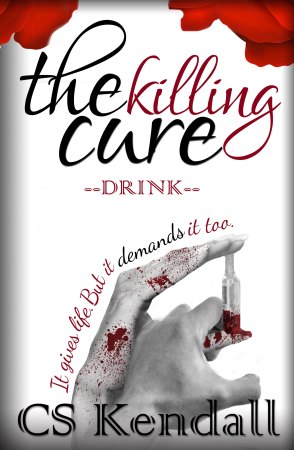 Childhood friendship turns to love in this dark reimagining of the fountain of youth. In 1919, Charlie returns from WWI and gives his heart to Julia. As their love story begins, tragedy strikes when Julia contracts a deadly illness. On her deathbed, dreams of a future together shatter, but Charlie refuses to give up, convincing Julia to drink from a vial of “healing waters” his war buddy swore would bring spontaneous healing.

Julia’s miraculous recovery brings hope, but the water’s murderous side effects snuff out the couple’s short-lived joy. Can Charlie help Julia fight the water’s call to kill? All their efforts may be in vain when Julia has to choose between running from the curse or embracing it in order to save Charlie.

Journey with Julia and Charlie through a love story that spans a hundred years and an age-old curse that spans more and worse, puts Charlie’s life and Julia’s soul at risk.

Link To The Killing Cure: Drink On Amazon Kindle Unlimited

What Inspired You to Write Your Book?
The Killing Cure: Drink really started with wanting to write a book that tested the boundaries of one partner’s love for another should something happen that causes the partner to take a dark turn and make decisions that are out of character for him/her. From there I thought about what could cause that to happen and decided it had to be something mythical. I imagined a fountain of youth that didn’t offer up healing and immortality freely but instead demanded a price. And then, what would happen if someone took a drink without realizing what it was? The idea grew from there!

How Did You Come up With Your Characters?
Julia developed in my mind first. Some of who she is is honestly based on some of who I am. Most of all, I wanted her to be likable and I wanted the change caused within her from drinking the water to be very extreme. In the end, she comes full circle, fulfilling her dreams in a different way than she ever thought imaginable.

Charlie formulated in my mind easily. He needed to be charming, sure of his love for Julia, and willing to prove it, even when his devotion was tested to the limit, and it is!

Book Excerpt/Sample
She wheeled me to our meeting place. Charlie was not sitting on the lumpy couch like he usually was; instead, he stood, his feet almost bouncing as they met the ground. His eyes were bright, his smile bigger than I’d ever seen.
As soon as we were alone, I asked, “What are you so happy about?”
“First,” he said and then kissed me. “Second, I’m happy because today you’re going to get well.”
I hardly had the energy to lift my gaze to his face. “Can you sit, please?”
“Oh sure, of course. See, I knew you’d beat this thing. It only became clear to me today how it would happen. I took the next train as soon as I knew.”
“What are you talking about?”
“Sorry. Okay.” He took a deep breath and tried again. “Do you remember my war buddy Arnold I told you about?”
“Was he the one who wanted to be the horse doctor or the one with the bizarre obsession with water?”
“The water.” Charlie’s eyes lit, and he pulled a chain from his pocket. On the end of it was a small vial with a clear liquid in it. “All I’ve thought about since I left you last was how I couldn’t lose you. I racked my brain all week long, prayed to God for you when I should’ve been sleeping, until the answer came this morning. I remembered I had it. You should’ve heard how he carried on and on about this water, how it would heal, how he went through hell to get it but it was worth it should he ever need it. And I thought, ‘Why let it go to waste?’ Especially now that you need it so badly. Obviously there was a reason I held on to the water. It wasn’t clear until now.”
“Oh, I love you. But there’s no such thing as healing waters. You said yourself he was superstitious.”
“I know I did, but what if there’s more to it than I thought? I can’t believe I didn’t think of this before.”
“Look at me, Charlie. I am skin and bones. My entire body hurts, and I can barely eat. I am being consumed right before your eyes, and you’ve got your sights set on some silly potion.”
And then I saw it. Behind the fire in Charlie’s eyes lived desperation. All his hope hinged on this sip of water. Insane as it was, he was willing to embrace any farfetched possibility if it meant he didn’t have to face the reality of living without me.
His face fell a little at my words, but he wouldn’t be discouraged. “What will it hurt? Drink it, please. For me.” He held the vial out, and I studied him. Hopelessness threatened to burst through the expectation in his eyes, and I felt sad for him. I, with a body full of consumption, pitied Charlie.
The pity came on the heels of my love for him. His plea warmed my heart, desperate as it was, because somewhere, deep down, despite all his optimism and prayers, he knew I was going to die. I took it from him, opened it up, and tipped it back. What harm could one small sip of water do?

Link To The Killing Cure: Drink On Amazon Kindle Unlimited