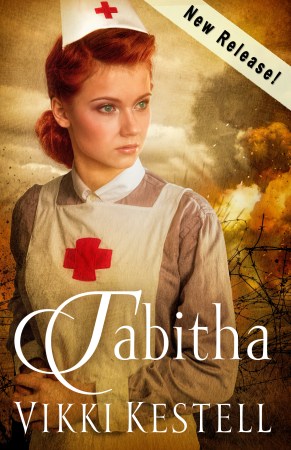 From the author of the groundbreaking series, A Prairie Heritage, comes the compelling story of fiery-haired, fiery-tempered Tabitha Hale. Tabitha gives her heart to God and her life to nursing.

When the Great War erupts in Europe, Tabitha hears God asking her to nurse the war wounded. Will the elite British Nursing Service accept the services of an American volunteer? And what is Tabitha to do with her feelings for Mason Carpenter, the man who simply refuses to give up on her?

“A timeless story of redemption and hope, Tabitha will pull at your heartstrings and delight you with its rich characterization and impeccable details. Tabitha is a book you will not soon forget.”

—Chautona Havig, Author of Christian Fiction without Apology or Pretense—Lived, Not Preached

What Inspired You to Write Your Book?
I love rich characterizations, a good, long meaty read, and unpredictable plotlines. This book has them all!

How Did You Come up With Your Characters?
My characters often come alive on their own. While I’m writing I sometimes say, “Whoa. I did not see that coming!” or “How did you figure that out?” as my characters insist on doing what pleases them and not me.

Book Excerpt/Sample
—EXCERPT—
A tiny girl with fiery red hair stepped forward. The child edged up to Tabitha, placed her hands on Tabitha’s knees, and stared at her with wide, expressive eyes.

“I beg your pardon?” And then Tabitha saw her, truly saw her. The tot was, perhaps, age four. Her wild, curling locks were nearly the same shade as Tabitha’s hair.

“Said, you m’ mum?” the girl insisted. She pointed at Tabitha’s hair and reached to touch it. The hand she stretched out had been badly burned. Two of the fingers were bent; the scarred skin stretched taut over them was marbled red and white.

O dear Lord, Tabitha mourned. So much hurt and pain in this world.

She pulled the child up onto her lap and the girl instantly sank against her breast.

“Smells good, it do,” she announced.

“This is Sally, Nurse Hale,” a nun whispered.

“Hello, Sally. May I look at your face?” Tabitha helped her to sit farther out on her knees so that Tabitha could examine her. Tabitha looked in Sally’s ears, eyes, nose, and mouth.

Tabitha shook her head. “No, darling. I am not. But your hair is a lovely color. Very like mine, do you not think?”

Tabitha flinched. “What? Who says so?”

“They all says so,” Sally sighed.

A font of ire burbled up inside Tabitha and, against her will, her heart went out to the child. “Tell me, Sally. Do you think my hair is nasty?”

Sally considered Tabitha’s question and then shook her head no. “Nay. Youse pretty.”

“Well, so are you, Sally. Your hair is like mine, so you are pretty, too.”

Sally watched Tabitha as if judging her words. Then she leaned into Tabitha and wrapped her arms about Tabitha’s neck. “I likes you.”