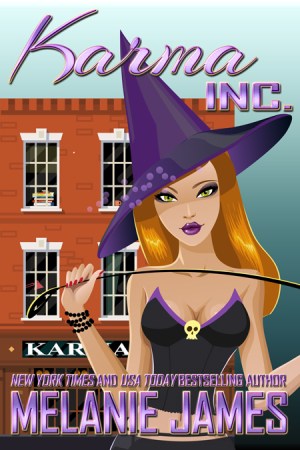 Waiting for Karma is fine—for the patient. But for the rest of us, it sure would be nice to give Karma a little nudge every once in a while.
Too many dates that turned out to be losers or liars? Have a problem with two faced backstabbers? And don’t even start with the so-called customer service centers. There comes a day when enough is really, truthfully, enough already. For Kelly and Esmeralda, two snarky single witches, that day was yesterday. After applying their witchcraft to dish out a little magical payback, they realize they have a penchant for the dark art of revenge. And who’s to say a witch can’t make a few bucks with a talent like that?
Doing the odd job was fun and gratifying. Then along came an unusual client with a pitch for an idea, “Karma Inc.-Reality TV.” The witches set up shop in the sleepy little town of Caldron Falls, Wisconsin. By enabling the good citizens to settle old scores, they hoped to transform the town into a virtual coliseum of televised revenge. It didn’t take long before a few inconvenient and unexpected dead bodies began to pile up. To complicate matters, Caldron Falls just happens to have more than its fair share of paranormal creatures, not to mention a Chicago mobster seemingly bent on taking over the town.
Can Esmeralda and Kelly solve the rash of unexplained deaths before they get the blame and end up behind bars? What will Marie Laveau and the Witches Union have to say about this? And as any fool knows, Karma carries a roundtrip ticket.

What Inspired You to Write Your Book?
Every once in a while you wish you could have a front row seat when Karma comes calling. The whole premise of this book is based on a simple question. If you could order Karma to pay a visit on someone, would you?
There are so many times in life where you just shake your head when you see how badly others are treated. My whole thought process behind this book was, how fun would it be to witness Karma in action. Would it go the way you expect?

How Did You Come up With Your Characters?
Most of the characters in this book are established witches in my Literal Leigh Series.

Book Excerpt/Sample
“Take some consolation in the fact that one day Karma is going to visit your boy, Jackass Scott. And all the rest of the jackasses, losers, liars, jerks, and those socially networked penises. Besides, we’ve got each other to hang out with, and the occasional boy toy.” Esmeralda gave me a very sly, tight lipped smile. “A little debauchery makes you forget about all that mushy romance.”
“Karma. Pfff. Karma’s overrated. It takes too long to show up. By then, you’ll miss out on seeing the look on their face when they realize Karma just paid a visit. Where’s the sadistic enjoyment in learning about it third or fourth hand? No, I want front row seats. I don’t just want to gloat, I want to experience some of that frickin’ schadenfreude!”
“You’re talking to the right witch.”
“What do you mean?”
“Okay, listen. I’m going to tell you this because you’re my only friend. I know you’ll keep it a secret. Right?”
“Uh huh.” I agreed, but something about the way she spoke in a hushed voice worried me. What sort of confession was I about to get thrown on my conscience?
Esmeralda leaned closer. “Black magic.” Her words were spoken as if she were suggesting we hire a hit man.
I jerked my head back. “Ezzy? Isn’t that, you know…” My fingers made quote marks in the air. “Forbidden?”