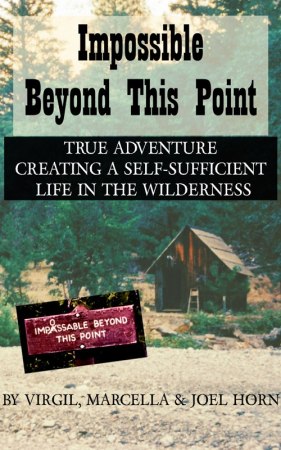 The true story of one family’s struggle and triumph creating a self-sufficient life in the wilderness. Join the Horn family on the adventure of a lifetime. Learn how a couple from the city moved to the wilderness with three small boys and carved out a life in the middle of nowhere that has endured for nearly 50 years.

Link To Impossible Beyond This Point On Amazon Kindle Unlimited

What Inspired You to Write Your Book?
Decades of questions about why we moved to a remote mining claim and how we survived, often followed by “why don’t you write a book?”

How Did You Come up With Your Characters?
The decades of the 60s and 70s produced a lot of real characters.

A cool breeze drifted through tall Douglas fir and ponderosa pine and fluttered the leaves in clumps of black oak as they sat on rocks amongst their scattered possessions on the red clay dust of Backbone Ridge in the far Northern California wilds of Trinity County. The blue Ford station wagon would go no further, for from this point on, two miles of treacherous trail picked its way down to a lonesome canyon where a shell of a shack stood waiting. This would be their home. Virgil and Marcy, along with their three young sons, came to this juncture through an untamed notion to find a way of life that would give them independence, dignity and contentment.

Virgil sat across from Marcy and his blue eyes twinkled. “I hope we made the right move, Ma. There’s no returning now.”

“Yes,” she whispered. “We made the right move.”

The sun had gone down and heavy clouds were piling up in the west. If it snowed now and turned cold, Virgil doubted they could get out in time to finish the school year. A purple haze settled in the gulches, making it difficult to distinguish objects like trees or rocks that they were beginning to find hard to avoid.

By the time they passed Wind Dance Lookout, it was dark. Below Wind Dance Lookout lay deep unbroken drifts and the dropping temperature formed a crust that supported them all. Partway down Marcy suddenly broke the crust and fell through to her hips in the snow. Exhausted, she struggled to get the leverage to free her legs. “I can’t pull my legs out! I’m going to freeze to death!” she sobbed. Seeing his mother crying put Gaines in a panic and he frantically dug the hard corn snow away from her legs with his bare fingers until she managed to climb free…..

Darkness fell and they heard the rain pound the roof over the roar of the river. The boys had a hard time concentrating on their schoolwork and it was just as well because about eight that evening the incandescent light started dimming. “Power’s going out,” Kelly announced.

Everyone stopped what they were doing and stared at the light. “Yep,” Gaines confirmed. “Can’t be from lack of water!” he laughed. “The creek must be really roaring up there and I bet it tore out the intake.”

As the light faded to yellow and then orange, Virgil got up and took a book of matches from his front pocket and lit a candle bug. “I’ll go turn the valve off so it doesn’t drag crap down the line,” he said as he headed out the door.

The family fell asleep to the sound of rain on the roof. The first few times the river had come up in the early years, Virgil and Marcy had nervously gotten up every few hours to check the water level but they never got up to check anymore.

Marcy awoke around midnight and listened to the rain. The river was quieter and she sleepily turned over, drifting back to sleep. Suddenly she remembered something Red had told them. “As long as the river is roaring, it isn’t so dangerous, but beware if it gets quiet,” he’d warned.

She looked at the phosphorescent face of her Big Ben clock. Noting it was a quarter to one in the morning, she concentrated on the sound of the river again. The hushed river was no longer relaxing, but foreboding. Unable to go to sleep, she got up and put on a coat, lit her candle bug and stepped out on the porch. Tom, his fur glistening with drops of water, yowled loudly and she let him in the house.

Crystal water ran from the eves and splattered in a puddle in the pathway leading from the porch. She walked to the summer kitchen area and down to the gravel bar where the sawmill was located. At the edge of this bar, she came to a sudden stop. Right in front of her, muddy waves of debris-laden water slammed against the gravel only two inches from the top. The river was three feet higher than she’d ever seen it, which was a huge difference considering that the three additional feet of depth was spread across 300 feet of width and moving at a greatly increased speed. Apprehension overcame her.

Though a candle bug is great for casting a soft diffused light for walking, it’s impossible to see beyond eight feet when using one, and in the streaming rain the visibility was even less. Marcy could only listen to what was going on beyond the cone of yellow light. Rumbles, hissing, sucking, splashing and surging, all in varying levels, met her ears.

Quickly she headed back to the cabin. Virgil was asleep and she gently shook his shoulder. “The river’s real high, Virg,” Marcy whispered so as not to awaken the boys….

Link To Impossible Beyond This Point On Amazon Kindle Unlimited