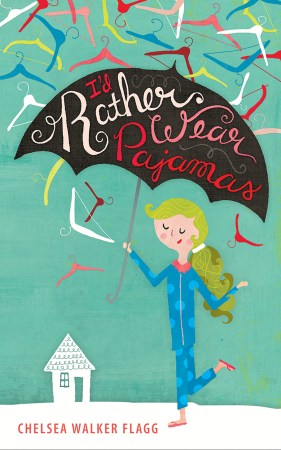 “Even though a butterfly could beat me up, I am strong and powerful in my own way. We are all capable of being strong. Sometimes, we’re just conditioning for it in the wrong way.”

Everybody has the awesome opportunity to find their own strength and path through life. Some come about their self-discoveries through studying and working hard. Others (Chelsea) spend their time nearly burning down kitchens and driving around the country with a car full of hangers.

Chelsea grew up wanting to be “strong.” She thought arguing her way through childhood and becoming a world-class attorney would get her there. But, through a series of humorous, and only slightly embarrassing events, Chelsea comes to realize that maybe her strength is meant to shine in different ways.

Spoiler alert: This book is secretly going to brainwash you into home birthing your children. No, I’m not kidding.

Link To I’d Rather Wear Pajamas On Amazon Kindle Unlimited

What Inspired You to Write Your Book?
As the mother of three young girls, I started wondering “what do I want my girls to learn from me?” I knew the most important thing I could show and teach them is to be true to themselves and to enjoy the journey of finding themselves in life.

I wrote this book for them. I wanted it to be a quick, light-hearted read, but still full of meaning and purpose.

How Did You Come up With Your Characters?
The characters were easy – I just looked at my best friends and life supports: my mom, my sister, and my husband. When you’re writing about your crazy adventures with your best friends, words come easily.

Book Excerpt/Sample
CHAPTER 1
How to Be Strong Without Doing a Single Pushup, and Other Little Life Cheats

The word I’ve wanted to be associated with for as long as I can remember is strong. Are you nodding your head enthusiastically because you feel the same way? Good, that means you’re reading the right book.
What attracts me to that word, you ask? Maybe it’s because I grew up with a kickass mother for a role model who continues to rock the word strong every day of her life. (Stay tuned for more on that later.) Or maybe it’s because I’m a girl who lives in a world where, regardless of how much progress we’ve made with sexual equality, women still feel the need to fight to prove themselves adequate to their male counterparts.
But, let’s face it, I think the real reason I’ve always longed to be viewed as strong is because I’ve never been able to do a single pushup in my entire life. Not a single one. As if gym class isn’t painful enough for every student ever; throw in that little nuance and you’ve got yourself a recipe for ridicule and embarrassment. I’d walk into those dreaded gym periods like I was walking the green mile to my death. The absolute worst was when that splintery rope would be hanging down from the ceiling, taunting me with the realization that it was rope climbing day. You know what I’m talking about, right? Those days couldn’t have been painful for just me. You stand in the lineup of students all waiting their turn while watching the poor sucker on the rope trying to scramble his way at least two inches off the floor. You contemplate ways to make yourself sick in order to get a free pass to the nurse’s office, but then it’s too late and it’s your turn. You pray that you don’t have a hole in your pants as you mount the rope. And then you get nervous. You get really nervous. Which means that you start spontaneously passing insane amounts of gas—while trying to climb the rope—with all your classmates down wind. I’m getting gassy just thinking about it.
In my own defense, I’m an otherwise athletic person with above average workout habits. Alas, my arm muscles remain nonexistent. At one point, even my mom was worried that maybe I was missing a muscle or two because my arms just didn’t seem right. As far as I know, all my muscles are there, but I guess I’ve never confirmed that with doctors.
Join Crossfit, you say? Yeah, I would if I wasn’t afraid to get turned away as a hopeless case. Also, I’m scared they might try to make me climb a rope. So, instead I’m spending my free time writing this book, which happens to take very little arm strength. Right up my alley.
Let’s not dwell on my arms any longer; it’ll only make me sad—and perplexed. Instead, let’s focus on that word again, strong.
What does it mean to be strong? Is strength truly defined by the number of pushups a person can do? Is it defined by the number of zeros behind your net worth, or the number of people working underneath you in an office? That was a confusing sentence…obviously, I mean that if you have people literally working underneath your desk, you wield more power.
I spent the first part of my life trying to condition myself to fit into a mold that I viewed as strong. I thought if I became an outspoken business-woman, I would garner insane amounts of respect, admiration, and all the Fruit Loops I could stomach. What, can’t a kid dream?
Several years and many failed attempts later, I’ve found my own strength and changed my definition of the word entirely. I still look at power-house business-women with great amounts of awe and admiration, but I’ve learned that it’s just not me. I’ve learned that strong actually equals true. Write that down.
Strength comes when you find yourself outside of any of the molds you’ve been trying to fit into, and then you find the courage to embrace whatever that looks like. In the words of Joseph Campbell, “We must be willing to let go of the life we have planned, so as to have the life that is waiting for us.”
We are all capable of being strong. Sometimes we’re just conditioning for it in the wrong way.

Link To I’d Rather Wear Pajamas On Amazon Kindle Unlimited