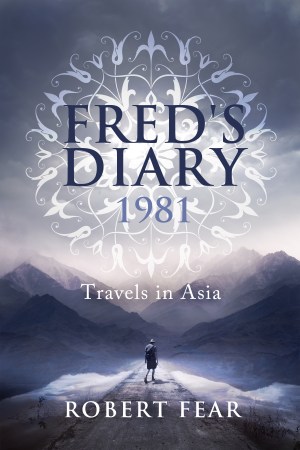 A fascinating insight into a young man’s travels around Asia in the early 1980’s.

Follow Fred throughout his extensive travels to Hong Kong, Thailand, India and
Nepal.

Appreciate the many friendships formed along the way with fellow-travellers.

Relive the highs and lows that he experienced during this fascinating journey.

Become immersed in the different cultures, peoples and surroundings of Asia in the early 1980’s.

Understand more about the drug culture of the ’80’s, especially in Thailand and Nepal.

Learn from Fred’s youthful mistakes, especially if your dream of travelling to Asia becomes a reality.

What Inspired You to Write Your Book?
It all started with a diary I kept whilst travelling around Asia back in 1981. This formed the basis of a project that I have been working on for over five years now.

This involved typing up the 600 pages into a manuscript and the subsequent edits that led to releases of Time in Thailand (Part 2), £99 to Hong Kong (Part1) and then the entire Fred’s Diary 1981.

This year I started a blog fd81.net where I ran a daily serialisation of the diary as part of the process of editing it for a second release. The daily diary was published on exactly the same days they occurred thirty-four years ago,

The second edition was released in October 2015
.

How Did You Come up With Your Characters?
As this is a record of my travels there was no need to ‘come up with characters’ as they are all genuine people from my life and fellow-travellers I met along the way.

The police were there making a check of the guest house.

While sitting on the verandah with an American guy, Stan, I remembered with horror that Scott had given me a small container of grass and that it was lying on my bedside table. I just hoped that my friend Graham had managed to get rid of it somehow.

My heart fell when I was called into the room and confronted with it. I didn’t have much choice about confessing that it belonged to me.

They carried out a body search, turned out my bag completely and were disappointed not to find anything else.

The next hour or so was spent filling out forms and reports for myself, Stan (small amounts of opium and grass) and Andy, another American guy, who was visiting a friend at the house. He only had a small amount of grass on him.

We all pleaded guilty. What big offences we thought and hoped that the situation could be sorted out within a couple of hours.

They had taken our passports and we had to go with them in an open truck to the police station where we were escorted inside. We sat in an office for a while and all of us at that time were expecting to be interviewed, fined and released. However, the wheels of Thai justice don’t move that fast.

Throughout this ordeal, a single thought went round and round inside my head: where oh where had it all gone so horribly wrong…