You are here: Home / Fiction / Fantasy / Beyond Everlight by Debbie Cassidy 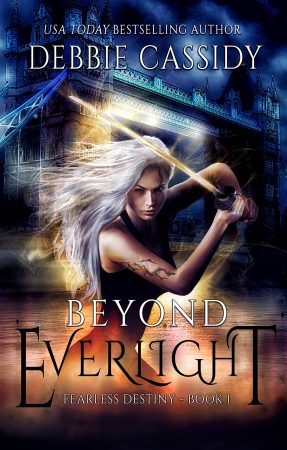 For Kenna Carter, life is simple. Kill the monsters, close the breaches, collect a pay-check and keep her secret safe…until fate decides to be a bitch…

Kenna Carter is one of the chosen. Branded by fate as Fearless, she and her companions patrol the night and keep the city of Lindrealm free from otherworld denizens. Any pocket of darkness, any nook or cranny can spawn a breach, allowing hungry monsters from the Evernight to come crawling though. A reluctant treaty with Erebus and his clan of dark djinn offers protection from the worst of the monsters, and maintains the balance needed to keep Lindrealm safe. But fate has other plans for Kenna.

One night, one mission, and her life is thrown off course.

Broken and filled with despair, Kenna finds herself in Erebus’s world, a place of eternal darkness and enchantments. A prisoner or a guest, she isn’t quite sure, but with the help of a guardian angel and a talking gargoyle she hopes to find out just where she fits in the grand scheme of things, because Kenna has a secret destiny. One that she is about to discover could require the ultimate sacrifice. But when the time comes, will Kenna make the right choice?

Link To Beyond Everlight On Amazon Kindle Unlimited

What Inspired You to Write Your Book?
This idea actually came to me in a vivid dream. I couldn't get it out of my head so ended up doing a ton of research on djinn. And the more I read and thought about it the more vivid the character and world grew in my mind.

How Did You Come up With Your Characters?
They tend to come to me. I've learned that if I have to try to hard then its not meant to be. All the characters that I've written have kind of unfurled naturally and begun speaking to me. Once that happens I know I'm ready to write.

Book Excerpt/Sample
The sound of my boots echoed like muted gunshots down the primary school corridor. Tiny faces peered at me through open doorways, while educators struggled to usher the small bodies back into the safety of their classrooms. They were doing a half-arsed job though—too enthralled by the two Fearless Officers eating up space. With my 5ft 8in frame, kitted out in my standard issue combats and leathers. A dangerous looking birth mark that ran from temple to mid-cheek, I probably looked like something out of an action comic to these kids. But Brett, nicknamed The Monolith by our unit, was the beast they couldn’t take their eyes off. His 6ft 5in frame of muscle either had people running in the opposite direction or rooted to the spot. Point was, they shouldn’t be here to do either.
I turned on the first educator we came to. “Why the hell haven’t you evacuated?”
The teacher, a guy who looked barely old enough to shave, opened and closed his mouth a couple of times; reminding me of a goldfish I used to have.
I leaned in, keeping my voice low enough not to scare the kids, but firm enough to get my point across. “Get the damn kids out of here. Now.”
“Kenna?” Brett grabbed my arm before addressing the educator in a softer tone. “Just get them back into their classrooms, and stay put until we tell you otherwise.”
I resisted the urge to shrug him off. This was too close for comfort.
“Kenna. Breathe,” Brett said.
“I’m fine.” But I wasn’t. The tiny ball of hot rage that sat in the pit of my stomach was threatening to expand.
I was a Fearless Officer. I protected the weak. I killed the monsters, and I didn’t lose control. But today was testing, because I couldn’t see this as just another case. This could easily have been Bella’s school, Bella’s class . . .Bella. The atrocity I was here to remove should never have gotten in. People paid good money to live here, to ensure their safety. But the past few months had proven that nowhere was completely safe. The recent rash of incidences in Everlight had the government scrambling for an explanation. To me it was obvious—they couldn’t keep the problem out, because they couldn’t stop people from bringing the problem in. The next step would be border checks. Our sanctuary was quickly becoming a prison.
“Did you check the wards?” I asked.
“Yeah, they’re intact.”
Fuck.
We strode toward the end of the corridor. A door opened ahead and a slender woman, hair pulled back in a messy up do, dressed in leggings and a colourful tunic, stepped out. Her eyes behind her spectacles were wide and frightened.
“Thank god you’re here.” She wrung her hands, glanced back into the room behind her, and then ushered us in.
I took a deep breath and entered. Brett moved behind me like a shadow. Today he was playing back-up. I scanned the walls, taking in the maps and charts. There was a huge one of Lindrealm—what was left of our world—with the capitol, Everlight, clearly marked. On another wall were close-up maps of Everlight and the surrounding boroughs. The gateways to Twilight and Evernight were highlighted in red and blue respectively. It was beautiful and horrific, because the world beyond those gateways was a mystery to all but a select few. And no one wanted to be one of those select few.
The windows were all locked with the shutters half down. The tables had been pushed haphazardly to the sides of the room. Chairs lay toppled higgledy-piggledy. And in the centre of it all sat a little girl—head bowed and knees up—rocking gently back and forth. Her hair was a rat’s nest of tangles.
“What’s her name?” I addressed the teacher.
“Emily.”
I nodded and took another step into the room. My hand moved to the holster at my hip where Frieda rested, inert but ready. “Emily, can you talk to me?”
The girl kept swaying.
“What is it? Can you get rid of it? Oh, god. That poor child . . . Her parents . . .This place should be safe,” the teacher babbled.
Yeah, it should. There were no cupboards or nooks and crannies, and the wards were intact. It made no sense.
“Emily, can you hear me?” I ran my gaze over her tiny frame, and then focused until the veil over my vision dropped and I saw the problem. Distorted and bloated, a monstrous thing clung to the child’s back. The urge to step away was immediate. It doesn’t know you can see it, so just stay cool.
The otherworld denizen lifted its puffy face. Its eyes rolled around in it its head, and then its body began to pulse.
Emily emitted a low whine.
“What do you think, Kenna?” Brett said.
I cocked my head and pretended to consider the situation. “OD Parasite Class.”
“Yeah . . .I think you’re right.”
Course I was right, but I needed him to see it too. Not with his eyes, because he couldn’t do that, but with the senses that came with his Fearless status.
“Fucking hell,” he whispered.
Correct again. This was gonna be hell. Severing the connection between the monster and the child could kill her, but leaving it would be a definite death sentence. I drew my weapon and flicked my wrist, activating Frieda’s blade. The room lit up with everlight.
Emily threw back her head and screamed.
“Oh, god!” the teacher backed up and ran from the room, slamming the door behind her.
A quick nod in Brett’s direction. “Hold her down.”
Brett flexed his biceps, his dark shirt sleeves stretching dangerously. “You got it, boss.”
Ignoring the screams and pleas and promises to be a good girl pouring from Emily’s lips, I moved in for the kill.

Author Bio:
Debbie Cassidy lives in England, Bedfordshire, with her three kids and very supportive husband. Coffee and chocolate biscuits are her writing fuels of choice, and she is still working on getting that perfect tower of solitude built in her back garden. Obsessed with building new worlds and reading about them, she spends her spare time daydreaming and conversing with the characters in her head – in a totally non psychotic way of course. She writes High Fantasy, Urban Fantasy and Science Fiction.

Link To Beyond Everlight On Amazon Kindle Unlimited