You are here: Home / Bargain Books Under $3 / Beneath The Surface by David K. Wilson 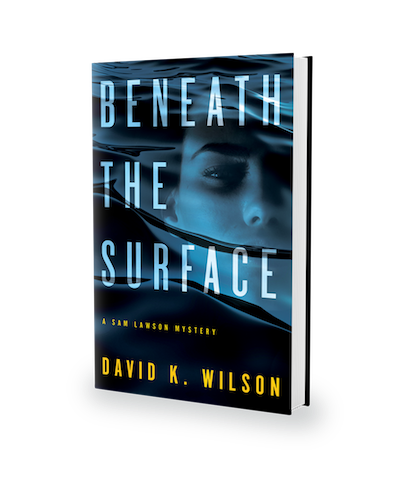 Beneath The Surface by David K. Wilson

Everyone’s favorite hard-living detective is back in a gripping, unpredictable mystery you won’t be able to put down.

When Detective Sam Lawson arrives in a sleepy East Texas town to investigate the mysterious disappearance of a young woman, he soon discovers everyone has a something to hide. And the more he digs, the more questions he uncovers.

Are the scratch marks on the face of the woman’s arrogant husband really from a construction accident? Why is the rich investor suddenly so interested in the investigation? Who had been hiding in the woods behind the woman’s house? Why one of the woman’s friends allegedly leave town the same day she went missing?

With the help of a tough-as-nails sheriff’s sergeant and the medical examiner (who also happens to be his now-estranged girlfriend), Sam must navigate the tangled relationships of this small community to find the truth before it’s too late.

What Inspired You to Write Your Book?
My plan has always been to create a mystery series around my main character, Detective Sam Lawson. So, even as I was writing the first book, Combustible, I was thinking of ideas. Then I watched a documentary on the Laci Peterson murder. I began to ask myself "what if" questions about every aspect of that case. That led me down a rabbit hole that eventually produced the plot of Beneath the Surface.

How Did You Come up With Your Characters?
I used the Notes section in Scrivener to create a one-page background for each character, which included physical description, occupation, personality, habits/mannerisms, background and internal conflicts. To help me better visualize the characters, I would even add a photo of either an actor or, since I have many Facebook friends in East Texas (where the novel is set), I would scroll through pictures until I found someone that fit the bill. I relied on these notes heavily – especially in the first draft – and would even update my descriptions if a character came to life in a different form as I started to write.

Book Sample
The smell of bleach hit Sam as soon as he walked into the house. Someone had been doing some cleaning. So much for an untampered crime scene.
The entry way opened into a massive living room. Dark wooden beams cut across the ceiling and a large steel chandelier hung from the middle. The rust-colored terra cotta floor, coupled with the mahogany trim and dark brown leather furnishings, completed the look of a beautiful Spanish villa. On the far wall, a large cow skull hung above the mantel of the huge stone fireplace, a roaring fire crackling inside. Floor-to-ceiling windows completed the wall and revealed a spectacular view of the lake.
The room was so impressive, the tall man sitting on the couch seemed small.
“I hope you’re coming inside to tell me you found her,” the man yelled.
The sheriff shook his head in reply and then motioned toward Sam.
“This here’s Detective Lawson from over in Quinton. He’s gonna help us out.”
“Mr. Puttman, I know this must be awfully hard on you,” Sam said.
“What’s hard on me,” Gary replied loudly, “is trying to figure out why you assholes are inside my house dripping all over the new tile floor.”
Kaster was right, thought Sam. He is an asshole.
Even though he didn’t stand up, Sam could tell Gary was tall and muscular. His dark hair was combed back and his eyes were piercing blue. He wore jeans and a light blue golf shirt. But what stood out the most were the three fresh scratches across his left cheek.
It was barely 10:00, but Gary clearly already had a drink or four. He lazily pointed down the hall.
“If you’re gonna waste my taxpayer money inside, at least dry off a bit,” he said. “There’s towels in the bathroom right off to your left. Try not to touch anything.”

Please join this author’s email list
For joining the author’s email/newsletter list you will get:
Free novelette: Bound By Murder