You are here: Home / Fiction / Mystery/Suspense / Barefoot in the Parking Lot by Vineet Verma 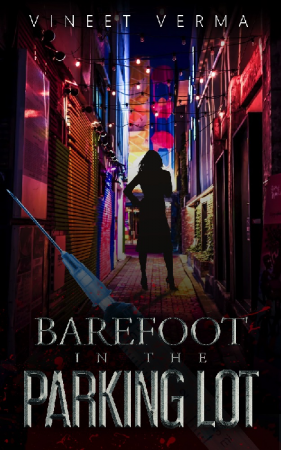 Targeted Age Group:: 18 and above

When a dead body is discovered lying barefoot in a restaurant parking lot, detectives Angela White and Paul Conley are called in to investigate the strange and disturbing crime. The victim turns out to be Jay Sharma, the hotshot CEO of a famed AI company and tech powerhouse. Jay’s distraught wife can’t imagine who could want to kill him. But the deeper White and Conley wade into the evidence, the longer the suspect list grows.

The detectives soon come face-to-face with the dark and sordid world that lies just under Silicon Valley’s polished and pristine exterior. From jealous ex-lovers to rival tech giants, Jay has created powerful enemies, all of whom would be happy to see him dead–and all of whom have solid alibis.

White and Conley hit dead end after dead end. And when blackmail schemes and copycat murders come into play, finding Jay’s killer becomes increasingly more urgent. Can they catch a break, or will a murderer go free in Silicon Valley?

Link To Barefoot in the Parking Lot On Amazon Kindle Unlimited

What Inspired You to Write Your Book?
I love reading mysteries and have also enjoyed writing from a very young age. There are always some ideas floating around in my head. This particular one took hold very strongly and before I knew it, I was writing a novel. 🙂

How Did You Come up With Your Characters?
I spent considerable time to build and define my characters. They are based on a combination of experience, personal as well as of people I know, or inspired by news stories or just a figment of my imagination.

Book Excerpt/Sample
Maya was brought back to the present when she saw lights outside. The cops were here. She picked up a pair of scissors, in case the intruder was still in the house. She put her ear to the bedroom door and listened for a few seconds. Once she was sure no one was on the other side, she crept down the stairs, careful not to make a sound. She stopped at the last step and tried to listen, while scanning the darkness for any signs of life. Convinced that no one was present, she sneaked towards the front door, weapon ready for attack if the need arose.

Author Bio:
Vineet is a tech professional by day and has been a lifelong fan of mysteries, be it in books or on screen. He enjoys writing and creating a world of suspense that leaves his readers guessing until the end. With his debut novel, Barefoot in the Parking Lot, and the follow up short story, The Stick, he has fulfilled his dream of becoming a published author. He lives in San Jose, California with his wife and twin boys and hopes to keep writing for years to come.