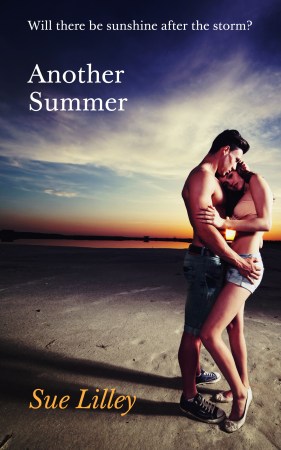 Joe has lied to Evie too many times. Believing he doesn’t love her, she runs off to her grandmother’s remote cottage in Cornwall. She wants nothing more than some time on her own, to think and make plans for the future. She doesn’t expect to fall under the spell of hot rock singer Jake, who sweeps her off her feet and tempts her with the promise of a sexy new life in the sun.

Meanwhile, Joe is shocked to come home and find Evie gone and he is spurred into action to win her back. But finding himself stuck on the road trip from hell, he has to battle through the worst weather the UK has seen in years, as well as his own inner demons, to drive to the other end of the country.

But has Joe left it too late to save their marriage? Can he get to Evie before she chooses Jake? Or can he convince her one last time that they belong together?

Another Summer is a sexy, fast-paced romance with believable characters rather than perfect role-models. It’s visual and emotional, a perfect rainy day read.

Link To Another Summer On Amazon Kindle Unlimited

What Inspired You to Write Your Book?
I was in Cornwall soon after a severe storm had caused major flooding. I saw the remains of an ancient bridge which had been destroyed by a rampant river. There was a shiny motorbike trapped in the debris. I started thinking what if…?

How Did You Come up With Your Characters?
I love a misunderstood rebel, the bad boy with a soft centre. I wanted to write about someone wanting to change and discover along the way if he means it. And then I wondered who would love him enough to put up with that behaviour and still believe in him?

Book Excerpt/Sample
Hardly a love affair. Not yet anyway. And hardly likely to become one, when they only had a week. It could be nothing but a passing moment, nothing to do with reality. But how she wanted that one perfect week. And if she was going to behave like a different person, at least she looked the part.

The corset felt like fancy dress, the perfect disguise to hide behind, although it was straining to contain her boobs. But when it got the attention of the overworked barman, she was pleased she’d been brave enough to abandon her everyday clothes. She was nervous and wanted a vodka but made do with tonic and lime as she’d promised to drive Jake home. She may be sleep deprived but she wasn’t deluded. She knew the evening wasn’t going to end with a peck on the cheek but she’d stopped being shocked by how much she wanted that.

She wondered where he was. Was she meant to hang about until he spotted her? Which wouldn’t be easy in this crowd. It seemed the band had quite a following. Their logo, Morgan Run was daubed like graffiti on the drum kit and a fair number of T-shirts. There was a buzz of anticipation and she hoped they were as good as Jake obviously believed.

As she squeezed her way to the front, the lights dimmed and the cheers tingled up her spine. The first three on stage were a lethal combination of looks and swagger. But when Jake strode out, he nudged them into a different league. His skinny black jeans were sprayed on the muscles of his thighs, his white shirt fastened by a single button at the waist. His cuffs were undone, wafting in the lights as he caressed the saxophone, eyes closed against the glare.

Then he sang solo and a hush fell over the crowd as he stood alone in the spotlight, his gentle voice haunting in the rustling silence. He seemed lost in some rapturous world away from the noise and the drunken adoration. Evie stood transfixed by his mouth and the thought of what it was going to do.

He played again, the most poignant saxophone blues she’d ever heard. She wanted him so much she could barely breathe and she ached to reach out and touch him. He opened his eyes and looked into her soul. Then he smiled, just once, before he disappeared.

She felt dizzy and tried to laugh at herself. What was she, sixteen again? It was only a song and he was a performer. He got paid to make people feel like that. But she still wanted him. It was a terrifying cocktail of guilt and excitement.

She made for the ladies room. But the corridor was crammed with gorgeous young girls, all tanned in tight little dresses. A sudden commotion and there he was, basking in the attention. Still playing to the audience, he tugged on the ends of a towel he’d slung around his neck. The white shirt was damp, clinging to the honed contours of his chest.

Author Bio:
Sue Lilley lives in the north east of England, when she isn’t escaping somewhere else in her imagination. She loves a good story, especially feel-good escapism that makes you miss your stop and be late for work because you can’t put it down. Her practical exterior hides the soul of a daydreamer and compulsive people watcher. She has been writing as a hobby for years, eavesdropping on people’s conversations on the Metro for inspiration.

She’s been married to Michael, an artist and fellow creative spirit, for more years than they’re brave enough to count. They have one grown-up daughter who’s far more sensible than either of them. Another Summer is Sue’s first published novel but now that she’s forced herself out of the closet, there will be others in the near future.

Link To Another Summer On Amazon Kindle Unlimited