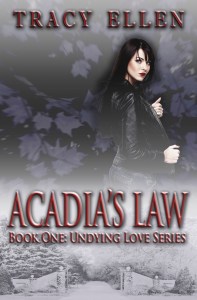 “If you are a fan of The Walking Dead then you should really enjoy this book.” — 5 Stars C Thrasher, Stephanie’s Book Reports Blog

“The epitome of a great zombie apocalypse novel!…I loved so much about this book. The storyline. Our strong female lead. Our hero who is much more than he seems on the outside…highly recommend!”–5 Stars Christy Wilson, Christy Herself Blog

“Acadia’s Law by Tracy Ellen has an awesome storyline that will keep you flipping the pages. Can’t wait for the next one!” –5 Stars A. Brantley, A Girl and Her Kindle Blog

Acadia’s Law–book one in an exciting thriller on the eve of the zombie apocalypse. Acadia King is a wealthy, young widow nervously planning to meet her first date in years at a hotel cocktail bar. But instead of a date, Acadia’s about to meet her inner badass, along with a hot football player and his clingy groupies, when a viral epidemic that turns people into homicidal crazies begins to sweep across the nation. Acadia and her new pals are caught in the terrifying panic when the infection erupts at the hotel. When greed, betrayal, and lawless chaos start to rule, Acadia finds out being tough is one thing, but does she have the skills and strength to be the leader their small band needs to survive? Or will she be the next victim of ruthless, relentless predators in a world gone crazy overnight? Acadia’s Law, a gripping zombie tale written with intelligence, wit, and the added twist of an intense sexual attraction that couldn’t happen at a worse time. Don’t miss this first book in a killer new series!

What Inspired You to Write Your Book?
I discovered the brand new world of indie authors a few years ago when I received my first Kindle and became hooked on reading zombie/apocalyptic books. Whether they’re novels based on the military fighting screaming hordes, or ordinary, everyday people frantically trying to survive, the stories in this subgenre of sci-fi / horror are a rush of nonstop excitement. I love excitement. Next, I volunteered to help edit another indie author’s zombie books. Soon after, I realized I wanted to write my own books, not simply edit.

I popped my self-published author cherry under my first, and longest, book-genre love by writing a series of contemporary romances under the title of “The Adventures of Anabel Axelrod”. After self-publishing my third book in the Anabel Axelrod series, I was incredibly grateful to be able to quit my day job and write full time.

Rubbing my hands together in glee, I dove into writing my long-awaited zombie book. The result was Acadia’s Law: Book One, Undying Love Series. I hope you enjoy reading this book as much as I did researching and writing the story of Acadia and friends. (I even scared the sh*t out of myself one night when home alone and writing!)

Look for book two, Acadia’s Revenge in the summer of 2015 and book three, Acadia’s Apocalypse next fall.

How Did You Come up With Your Characters?
I was driving behind a SUV and idly noted it was GMC Acadia. I said the word ‘Acadia” out loud and liked how it tasted. I then said, “Huh.” I thought a woman with that first name could only be razor-sharp intelligent, witheringly sarcastic, maturely practical, black-haired, silver-eyed and small-breasted, and potentially, an all-around badass zombie slayer. Thus, Acadia King was born.

Rod “Ram” Ramaldi, the half Italian-half Norwegian pro quarterback football star sprang from God knows where in my imagination. I only knew going in that a hot man much younger than Acadia was going to horrify her by relentlessly pursuing her butt in front of man and country, zombie apocalypse or no zombie apocalypse.

“Man is the hunter, woman is his game. The sleek and shining creatures of the chase, we hunt them for the beauty of their skins; and they love us for it, and we ride them down.”–Alfred, Lord Tennyson

It was a blur exactly when, but I’d kicked off my heels somewhere along the line tonight when the massacre began back in the hotel bar. Now running up the main staircase of King House, my bare feet made sticky slapping sounds on the hardwood treads. My heart pounded double time in concert with my feet. Terror clawed deep in my gut.
Inside, I screamed my denial at the unbelievable turn of events. “THIS was how my lame attempt at starting a new life will end before it even begins? Being chased up the stairs in my own house by Minnesota’s new starting quarterback–and he’s out for my blood?”
Speaking of blood, the front of my torn and ruined black cocktail dress was drenched in the stuff. Pumping my arms and climbing as fast I could, the strapless bodice stayed glued against my chest thanks mainly to the encrusted gore of a dead man. That fact didn’t help my hysteria level. With each running step, I felt clammy air on my exposed backside, or maybe it was the breath of the man after me.
Not much of a TV watcher or team sports fan, I had no idea who Roderick “Ram” Ramaldi was until a few minutes ago in my kitchen. Nor did I care. I never knew the name of Minnesota’s old quarterback, much less the brand new one.
When I first approached Rod’s table in the cocktail lounge earlier tonight, I’d overheard a group of girls huddled at the bar gushing that Rod was the illegitimate son of a married Italian woman and a playboy Norwegian Royal. It had struck me a little odd they’d known such personal information about some random man at a bar, but I blew it off as idle gossip. That was easy to do because anybody from Minnesota knew the term ‘playboy Norwegian’ was an oxymoron. I hadn’t paid much attention to the girl’s chatter after that because, like football, the loins Rod sprang from were another thing I couldn’t care less about. My loins, however, were a different story and why I was there in the hotel. Rod was the sexiest man I had ever laid eyes on, bar none.
He’d introduced himself to me simply as Rod Ramaldi. I had presumed the two other men leering at the colorful array of women sprinkled around their table were Rod’s carousing wingmen. I learned they were indeed his carousing wingmen, and his teammates. Offensive linemen, I believe was the correct term.
The huge men sure had the offensive part nailed down. They referred to Rod as Ram. It goes to show you the state of my mind back at the hotel bar that I viewed Rod’s nickname of Ram as a positive. Coupled with his first name, I had hoped it referred to his bedroom prowess. That small spark of attraction I’d felt earlier was just what I needed to start my new life. Or save my life, depending on your perspective of my long bout of depression.
Instead, a couple hours later, here I was running up the stairs in fear for my life.
Rounding left at the first landing on the Y-shaped grand staircase, my frantic glance fell down to the open hallway far below. Crowding together with their heads pointing up, I got a quick snapshot impression of my friends and family. They stood there with their mouths hanging open, slack-jawed. I was simply grateful nobody else was following us up the stairs yet.
Chasing after me, Rod’s legs were like pistons and seemed twice as long as mine, eating up three stairs to my scrambling one. Luckily, I had enough of a head start on him and this was my house. Bounding up and over the last wooden tread, I gripped the bottom of the carved pineapple finial that topped the balustrade. As I had done countless times, I swung myself tightly around the post and propelled my body down the second story hallway of the family wing.
Flying past closed doors, I flung open the last one on the right. It crashed against the doorstop with a loud “boing” and was springing back when I ran across the threshold into my bedroom. Throwing the heavy door closed behind me, I whipped around to lock it. I caught a glimpse of Rod’s furious eyes and bloody face. He went for me just as the door clicked shut.
I threw my weight against the wood and quickly turned the deadbolt above the glass doorknob. Bending down, I lifted the cane bolt lock mounted vertically near the bottom edge of the door and then twisted, ramming home several inches of the foot long iron rod into the designated circular hole in the floor.
Leaning my sweating forehead against the secured door, I panted while the big football player pounded on the other side. The deadbolt was not some rinky dink hardware store model, but the best steel money could buy. The cane bolt lock made it nearly impossible to kick the door open without first destroying the door itself. Milled over one hundred years ago from a black walnut stand on the property near the lake, all the doors in King House were solid as rocks. Rod “Ram” Ramaldi could do his worst, but short of exploding the door off its hinges, he wasn’t getting in anytime soon. I was safe for now.
The sheer stupidity of that thought caused me to moan. I fell to my bare knees in drained exhaustion, shaking with delayed reaction. I fought the urge to throw up from the awful stench rising from my dress and suffocating me. Horrifying images flashed across my brain.
I had killed people tonight.
Now that I stopped running, flipping out may be next on the agenda. I feared nothing would ever be normal or safe again.

Author Bio:
Tracy Ellen was born in Indiana to middle-class parents, the third out of five hellions. She often used her supernatural powers to force her family members to listen to her talk and tell stories. When that tough crowd laughed of their own free will, Tracy knew the world would someday, somehow be her stage. Now she’s a full-time writer living her dream. Tracy’s lived in the Midwest her whole life–in a small town, on a farm, and in the big city. Currently, she lives in the suburbs of St Paul, Minnesota with her husband, family, and various pets running underfoot. Stay in touch by signing up for Tracy’s occasional newsletter to keep posted on new books coming your way. She also has a fetish about giving fun surprise gifts to exclusive members every edition.