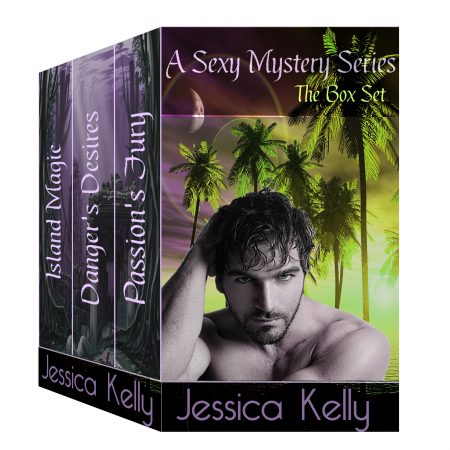 Lurking in the shadows of lust, danger waits…

But Ty doesn’t want to live off the family fortune. He’d rather create his own.

This hot billionaire didn’t settle on the Caribbean Island of Ile St. Clare to soak up the sun. He’s a Marine Archaeologist who came to paradise to live out his dream — finding the long lost treasure ship, Hesperus, and unlocking the secrets that lie within the crystal blue ocean waters.
Shooting on location in Ile St Clare, Hollywood’s hottest movie star Brandi Dorn has other plans for the sexy billionaire. And why not? His prowess is legendary. Sexy Brandi has an insatiable appetite for a lot more than fame, and she wants the notorious treasure hunter in her bed.

Ty is only too happy to give her exactly what she wants, but it’s still not enough.
He has bigger plans, ones that go far beyond the sizzling heat of Brandi’s bed. After all, Hesperus — and all of its centuries-old secrets — is out there. But little does he know that his quest for the truth is about to turn dangerous.
Danger doesn’t stop a maverick like Ty, though.

Baffled by the mysteries of the ocean and the forces that keep trying to stand in his way, Ty turns to a renowned island expert. But she’s hardly a stuffy scientist. Golden-haired Paige Brady happens to be as beautiful as she is brilliant.

Ty and Paige are about to embark on a wild adventure — one that’s as hot and heavy on dry land as it is deep within the ocean waters.

What’s waiting for them?

Will Ty be able to provide the answers that the peaceful islanders have sought for centuries? Is island magic something that you can actually believe in?

A Sexy Mystery Series — The Box Set will take you on a wild ride that lasts for nearly 500 pages. All three of the books in this sexy romantic mystery series contain steamy scenes and adult content, so they’re best-suited for readers who are 18+.

Here’s what readers are saying about this series:

– “OMG this storyline is amazing and the cliffhangers are crazy. I was totally swept up in the story.” — Readers’ Group Reviewer

– “Sweet mercy… This has been an amazing storyline.” — Readers’ Group Reviewer

– “I just finished reading this series, and all I can say is wow!” — Readers’ Group Reviewer

– “I could not put it down until I finished the whole book… This is a must read.” — Readers’ Group Reviewer

– “This had it all — tons of steam, a really good mystery, and another hot Montgomery.” — Readers’ Group Reviewer

What Inspired You to Write Your Book?
I love creating stories that take readers on wild twists and turns. There’s plenty of spicy romance in this story, but there’s also a solid plot — and lots of surprises — to go along with it. To me, that makes for the perfect book!

How Did You Come up With Your Characters?
Ty Montgomery has more than enough money to buy whatever he wants. However, the one thing he truly wants is something that money can’t buy. That’s something that we can all relate to! His world is just fancier than ours — which makes for a fascinating journey.

Book Excerpt/Sample
Ty Montgomery stared into the monitors. Brandi Dorn was Hollywood’s hottest star, and she was giving it her all. She was absolutely spectacular. He watched hungrily as her honey blonde hair fell across those dark, sexy eyes. Just as they did when she was over him. And the legs. So long. So perfect when they wrapped around him. His eyes focused — as they always did — on her enormous boobs. Ty’s arousal stirred in his trousers. Brandi’s talents were quite remarkable.

The director’s shout brought Ty back. Not that he wasn’t enjoying the spectacle. Truth be told, after a long boring afternoon, he was enjoying every minute of Brandi’s performance. He would reap his rewards with the sexy Brandi Dorn in a few hours. It was just that there were more important things that demanded his attention. Caribbean Isles Exploration, CIE, was on the verge of their most significant discovery in his company’s two year history. Although he did have two million dollars invested in this film. Best to pay attention.

“And apparently so does Mr. Montgomery. Monitors putting you to sleep Ty?” the director joked.

“Not at all, Henry. Sorry I’m just preoccupied with another business venture.”

“People would kill for this,” Brandi whispered as she approached Ty and kissed him on the forehead.

“Well it should be,” she said licking her lips seductively as only Brandi could. “Two million dollars is a lot of money. Even for you, Ty.”

Ty stared at the veteran producer. Fiftyish, built like a tank, and in perfect shape. “Your Caribbean tan suits you, George.”

“As does yours, Ty.” Watson grinned, his white teeth providing the perfect contrast to his bronze skin. “It means a lot to the entire crew, you coming by. If not for you–“

“Not just me, George. A film of this magnitude has an entire fleet of anxious investors.”

“But none with your celebrity status, Ty,” he said grinning. “We’re more accustomed to the hedge fund types. But who am I to complain? Another month and we’re back to L.A. Right on schedule.”

Watson signaled to his director. “Henry what do you say we wrap up filming for the day? I’d like to get with you in the office. Brandi, how about you put some clothing on and escort Ty out of here?”

“Works for me,” Watson grinned as he extended his hand. “Look forward to seeing you at the grand finale, Ty.”

Ah, yes, the grand finale. Another opportunity for the egos from L.A. to gather for cocktails and gossip. Ty sighed to himself and forced a smile. “I look forward to it.”

“In your world, I agree,” he said taking her hand and leading her out of the lot towards the reserved parking spots.

“And in your world, Ty? You know everything isn’t about diving for treasure.”

“Of course not, baby,” he said eyeing her giant tits. As bored as he’d been watching the filming all afternoon, soon it would be time to appreciate Brandi’s best skills.

“Want what, baby?” he teased admiring the view up her tiny skirt just before he closed the door to his Porsche.

“Sex,” she winked the second he sat down next her. “Hot sex.”

“Damn, Brandi,” he groaned as she ran her fingers over his desperate cock. Bored or not, watching her prance around the set half-naked in her skin tight mini skirt and her tiny halter had stirred his passions. Ty shifted the Porsche into gear and headed towards the beach.

She’s not afraid of working hard to make her dreams come true. Luckily, though, creating new characters and new plot twists doesn’t actually feel like work to her!

Jessica dreamed of becoming a successful romance author for more years than she can count. Now that she has written more than two dozen novels that combine love, lies, suspense, and the occasional second chance, her dream is officially a reality.

When she’s not dreaming up new story ideas, this native Floridian can be found spending quality time with friends and family, soaking up the sun on the beach, and — of course — reading.