You are here: Home / Fiction / Romance / A Knight for Kallen by Lauren Linwood 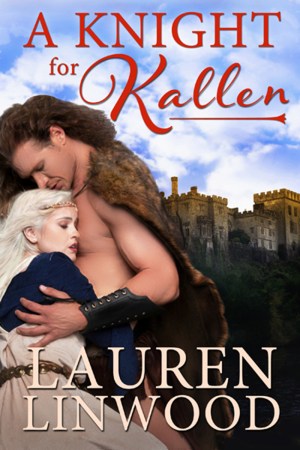 Targeted Age Group:: romance readers of any age, especially those who enjoy medievals

Kallen de Mangeron grew up in a convent, her noble family never knowing of her birth. When a new Mother Superior informs them of her existence, they send trusted knight Griffith Sommersby to escort her home.

Griffith’s heart broke when he lost his wife and infant son during childbirth, and he’s kept his feelings locked away from the world—until he meets Kallen. He soon learns her dark secret—that she sees auras around people—which allows her insight into their actions and personalities.

Now Quentin, bastard brother to the king, decides to harness Kallen’s gift in a plot to win the throne. Will Quentin successfully use a kidnapped Kallen as his political pawn, or will Griffith be able to stop him before Kallen changes the course of England’s history?

Link To A Knight for Kallen On Amazon Kindle Unlimited

What Inspired You to Write Your Book?
I read an article about a woman who could see auras around people. Different colors meant different personalities and traits. I decided to write a medieval heroine who had that talent and throw her into the political intrigue of a plot to overthrow the king–using her hidden talent.

How Did You Come up With Your Characters?
I always choose their names first, then I begin to see them physically.

Link To A Knight for Kallen On Amazon Kindle Unlimited