You are here: Home / Fiction / Women's Fiction / A Daughter’s a Daughter by Irene Vartanoff 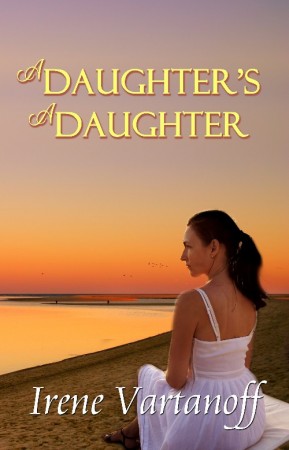 Three Generations
Widowed Pam Ridgeway decides to be daring after losing her dull clerical job in a mass Wall Street layoff: She’ll mobilize a charity to help laid-off workers. But that will thrust her into the public eye, which she’s always hated, unlike her estranged daughter and intimidating mother. Yielding to their insistence on publicity tactics takes Pam totally out of her comfort zone—until she meets Bruce, her mother’s handsome new neighbor at her Long Island beachfront home. Bruce is sympathetic, easy to talk to, and attracted to Pam. But Bruce has a secret agenda involving her mother and a mystery from the past.

Pam’s daughter is a fiercely ambitious cable financial reporter with an agenda of her own about the hottie she works with. She fights to keep a lid on her desire, otherwise their passionate attraction could burst into flames in the newsroom and destroy their careers.

Pam’s mother wonders why Bruce reminds her of someone from the past. In a long life filled with social activism, she has met many people, but there’s something about him…

Link To A Daughter’s a Daughter On Amazon Kindle Unlimited

What Inspired You to Write Your Book?
The Wall Street meltdown of 2008 started me thinking about what would happen to an ordinary person who lost an ordinary job because of a company-wide layoff. My heroine, Pam, wakes up and re-starts her life, and she reaches out to help others. In the process, she grows, finds new love, and at last is able to connect better with her mother and her daughter.

How Did You Come up With Your Characters?
Anyone who has ever worked has probably experienced a layoff, plant closing, department shutdown, or more. I’ve experienced them all, so it was easy to come up with Pam, my heroine who suddenly loses the job that was the anchor of her life.

I created Pam’s daughter, Linley, to show how a self-absorbed young woman could foolishly discount the choices women of a prior generation made. Linley has a lot of maturing to do in this story, and its complicated by her twin drives for success and for Jason.

At the same time, I’ve known people who spent their whole lives being active in social causes, as Dorothy has, so I made her an elderly woman who did it all: housewife and mother and distinguished servant of the community.

I based the mystery in Dorothy’s past on a true story that has haunted me for many years. As for her personality and her life circumstances, she’s an amalgam of many women of the post-World War II generation that I encountered while growing up.

Book Excerpt/Sample
“Was there something you wanted, Jason, or are you just trying to annoy me?”

“Go out with me Friday night. We should get to know each other,” he said, in an offhand manner.

Linley searched his eyes, not seeing the irony she expected. Had he forgotten the night they’d ended up in bed? Was it possible? No, his eyes showed he remembered.

“Been there, done that.” She didn’t make any attempt to soften the refusal. She kept her voice too low for others nearby to hear.

“I don’t recall us talking much,” he countered, leaning closer, his voice challenging. “It’s only dinner. Hands on the table at all times.” He spread his hands out palms up, indicating his pure intentions. Then he spoiled the innocent gesture by smiling at her and dazzling her with his raw animal appeal.

She wanted to melt.

Was he serious? Was he pretending he didn’t feel the chemistry that still sizzled between them? Day after day, she could barely restrain herself from staring at him inappropriately. Drinking in his features, laughing like a fool at his witticisms, lusting after his powerful, well-shaped body she’d memorized that one night last year. Professional protocol forbade any random touching because of sexual harassment issues, which was all that saved her. That one handshake when she got the job had been electric. If they ever touched again, she would go up in flames.

She refused to take the risk.

“Thanks for the invitation. Some other year.”

If only she felt as coolly indifferent as she sounded. He was very tempting. He could hardly look any more handsome. His dark tailored suit was a perfect foil for the shocking pink shirt and tie he wore, and both emphasized his regular features, skillfully trimmed hair, and piercing dark eyes. He was an attractive, virile man and he was smiling at her and wanted to spend time with her. She wanted to make love to him. She wanted to have time to explore his face, kiss every indentation and crease. His body. She wanted to press the skin of his naked chest with her own, and feel the heat of their flesh mingling.

She couldn’t take this another moment. She stood abruptly, and swiftly walked around Jason. Then she picked up speed and headed for the safety of the ladies
room. It was definitely a retreat. She’d soak her neck and wrists in cold water until he went to his next program appearance. Or until she had regained some
semblance of her usual poise.

Wasn’t this what she wanted? After all these months, he had made a move. She was a wreck. How was she going to tough out sitting next to him when they went
on the air in a few minutes?

Author Bio:
Award-winning author Irene Vartanoff combined her love of comic books and romances by working for Marvel Comics and DC Comics as well as Harlequin, Bantam, Berkley, and My RomanceStory.com. As a teenager, her letters to the comic editors caused such a sensation she was incorporated into the storylines of several comic books, notably, Metal Men and The Flash. Dubbed “Poison Ivy” at DC Comics, she received a new sobriquet when she became an editor at Marvel Comics, working closely with Stan Lee, who named her “Impish Irene.” Following a long editorial career in romance publishing, Irene turned to writing novels. A lifelong East Coast resident, Irene currently lives in a forest of tall oaks in the wilds of West Virginia.

Link To A Daughter’s a Daughter On Amazon Kindle Unlimited